When is the right time to start Application Modernization? Extreme Compute 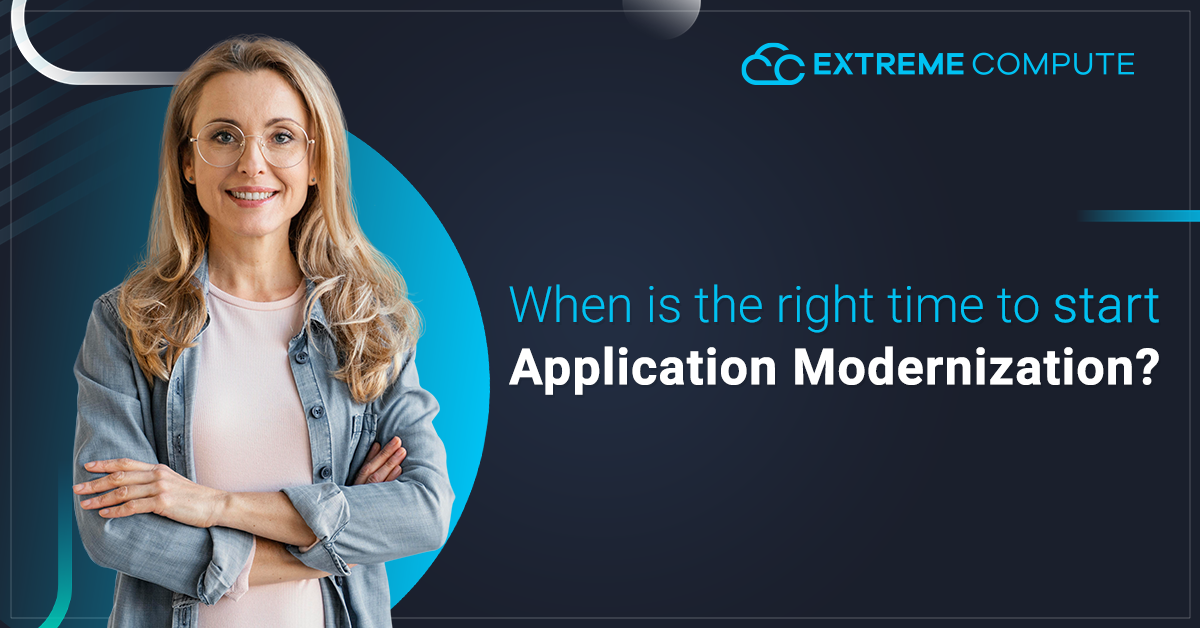 What is the meaning of Application Modernization?

Application Modernization is the process of upgrading an application so that it can be maintained, expanded, distributed, and handled in a way that enables it to meet the current and future needs of the enterprise. Legacy application modernization is a project that updates current, outdated software with modern functionality and capabilities in order to generate new business value. You will have the new functionalities that better fit with what your company needs to thrive by migrating your legacy applications.

It can be time-consuming and resource-intensive to keep existing systems running smoothly while also being able to meet current needs. That’s especially true when software becomes so old that it’s no longer compatible with modern systems. A complete solution is made up of one or more custom-written program components, as well as supporting infrastructure, application middleware, middleware resources (such as databases, queuing software, integration software, and other aspects), and other components. It’s most likely spread over many processors, either for horizontal or vertical scalability. It may break into multiple geographical regions, as well as multiple operating systems and computing architectures.

Now that we understood what it is, why should anyone be considering Application Modernization and what are the reasons that are around it?

What is the Point of Modernization?

There are three things we’ve seen that are compelling reasons to start the journey:

When should you consider modernization?

According to statistics, there are various pain points associated with existing systems that may benefit from modernization, but the following are the most common: legacy applications, ageing infrastructure, and businesses lacking agility.

There are thousands of Line of Business systems designed for budgeting, order management, invoices, permits, and other functions that are critical to the success of a business. These business functions, in fact, can be unnecessarily complicated.

Multiple systems can perform similar functions, requiring an employee to jump from one system to the next in order to complete their work. These varying levels of accessibility can stifle efficiency and make it difficult for companies to respond quickly to disruptive situations.

Infrastructure that is deteriorating

Legacy infrastructure may be decades old in some cases. For example, some businesses continue to use very old frameworks, which date back nearly half a century only because it is very complicated to get out of it. It may be difficult or impractical to replace a system that has served as a core feature of your company for a long time.

The infrastructure of a company can also be very complex, with certain processes running on old frameworks, custom-built applications, or an ISV solution tailored specifically for that company. Apps may be hosted on-premises, making it more difficult to innovate on or sustain at the pace required.

When a Business lacks Agility

An organization’s agility suffers as a result of legacy applications and aging infrastructure. Employees spend approximately 30% of their time on administrative activities such as copying data from one system to another, conducting approvals through several systems, and tracking down data that is hidden somewhere in one of these systems.
In addition to slowing down staff, many CIOs estimate that 70 to 80 percent of their IT budgets are dedicated to maintaining or operating existing systems, leaving little space for innovation. These legacy systems and aging infrastructures can be a drain on company capital, which technology modernization can help to mitigate.

That being said, going for application modernization shouldn’t solely arise out of staying ahead of the competition or to just stay updated in the tech world. You should consider it if your business demands it and if your projections show promising results with it, which is the right time to start it.